The rate of digitalisation and its future direction, and the numerous benefits and challenges placed before companies and individuals by the processes of digital transformation, were the topics of discussion during the DIDS 2019 conference.

The tenth anniversary edition of Serbian Internet Domains Day (DIDS) was held on 5th March in the conference hall of the Belgrade Metropol Palace Hotel, organised by the Serbian National Internet Domain Registry (RNIDS) Foundation. Almost 350 attendees, as well as many watching the online stream, were able to hear first-hand about various aspects of the processes that are changing our lives, our leisure and our business, and which are encompassed by the term “digital transformation”.

The tenth DIDS was officially opened by Vladimir Manić, Director of RNIDS: “Digital transformation has become an inescapable fact of our everyday lives. It is present in business, and in the state and private sectors, and the Internet is one of the key factors in this transformation. Our Foundation has recognised the significance of digital transformation and so this anniversary DIDS will focus on this topic.” 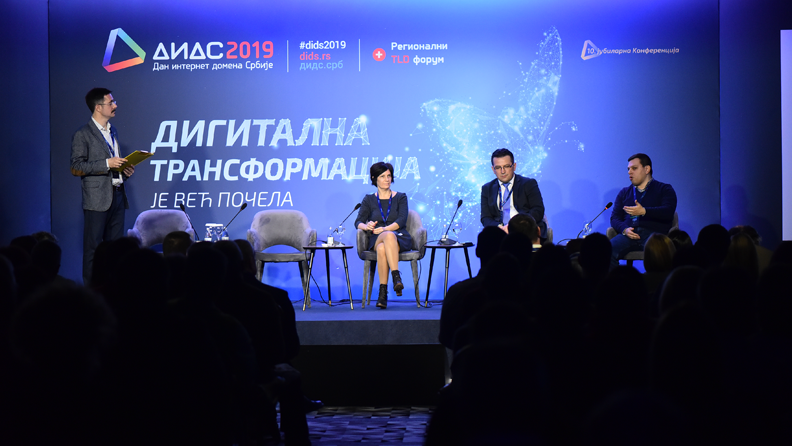 During the first block, Transformation of government services, there was discussion of the prospects that tasks which currently involve waiting in queues and filing copious paperwork could be conducted online in the foreseeable future. Is 2030 a realistic year to aim for?

“The Central Population Registry is something we are currently working on and it is of great importance that this be set in order. The Registry will be a starting point; later we will be integrating other state institutions,” said Svetlana Jovanović, senior adviser to the Serbian Prime Minister.

“Change is important not only in the way services are provided but also in the behaviour of users.” “On the e-Government Portal there has for a year now been a facility to make a one-click request for the state administration to inform you when any of your documents are about to expire. So far only 155 people have used this option,” said Duško Sivčević, assistant to the head of the Sector for Analytics, Telecommunications and Information in the Ministry of Internal Affairs.

“Right now we have electronic documentation which later gets printed off so it can be filed, stamped etc. If we are talking about where we see ourselves in 2030 as regards the Internet and digital transformation, transformation can happen earlier, but we need the continuity of work we are seeing right now,” said Slobodan Marković, Technical Advisor for Digital Governance at the UNDP.

Digital transformation in business and data security were some of the topics of the second panel debate. The discussion centred on large business organisations, as well as on the use of digital tools in the development of family businesses.

“The process of digital transformation in the company I work for began with the use of digital technology for CRM, and after seeing success in that area we have come to the point where we are using artificial intelligence in certain aspects of our business,” said Ilijana Vavan, Managing Director for Europe at Kaspersky Lab, who also emphasised the importance of awareness of the security challenges digital transformation brought with it.

Société Générale Bank in Serbia has exchanged its classic banking for digital in order to retain and expand its client base. “First we upgraded our own system, and then we educated users so that the online system could come into full effect,” said Aleksandar Blagojević, Manager of the Digital Branch and Client Support.

Roland Haidner, CFO at A1 Digital, stressed the connection between digitalisation and value propositions in business, not only in some industries but in all sectors of industry.

Doing business with the help of both gardening and digital tools was the topic addressed by Dragan Sajić, owner and editor of the garden.rs portal. “We know that in addition to producing things it is of paramount importance that we use the Internet to its fullest in promoting our services.”

This year 5th March was not just marked by the anniversary DIDS conference – it also saw the launch –at exactly noon – of public registration of IDN names within the .RS domain, as well as registration of domain names with the extended Cyrillic character set under the .СРБ domain. IDNs (Internationalised Domain Names) are Internet domains written in local languages and scripts, and their impact on Internet usage was the focus of the third block, Transformation in the service of national identity.

Leonid Todorov, General Manager of the Asia Pacific Top Level Domain Association (APTLD), addressed the question of whether multilingualism really did promote diversity on the Internet.  “There are languages that have no script and so cannot be used online. There are countries in which Latin script is not used, languages with huge numbers of users – Russian and Chinese, for example. Users need to be educated, and opening up the Internet for the use of new languages offers the possibility of choice.”

“The ability to use the Internet in languages and scripts that are not English is a major step, which has been worked on for a decade now. IDN supports diversity, but it is important that the opportunities it offers are taken up in practice. Serbia is on a good path as far as IDN is concerned,” said Giovanni Seppia, International Relations Manager of EURid.

Dejan Masliković, assistant to the Minister in the Serbian Ministry of Culture and Information stressed the significance of preserving the Cyrillic script and hence the cultural identity that it is part of. “Our ministry has held a series of workshops and seminars in institutions that are local centres of cultural activity. We have been working on getting them to set up Cyrillic-script web sites and also have them hosted on .СРБ domains.”

Milan Pantelić, Sales and Sales Network Manager for Motrio, Renault Nissan Serbia, talked about the commercial benefits of using Cyrillic. “We thought about how to distinguish ourselves from the competition and decided to use Cyrillic script. The response has been excellent, and I hope that there will be more examples of this.”

Digital transformation has already begun. It remains for us to make use of the benefits that technology has already made possible.

If you continue browsing without choosing one of the options, you agree with the usage of cookies.