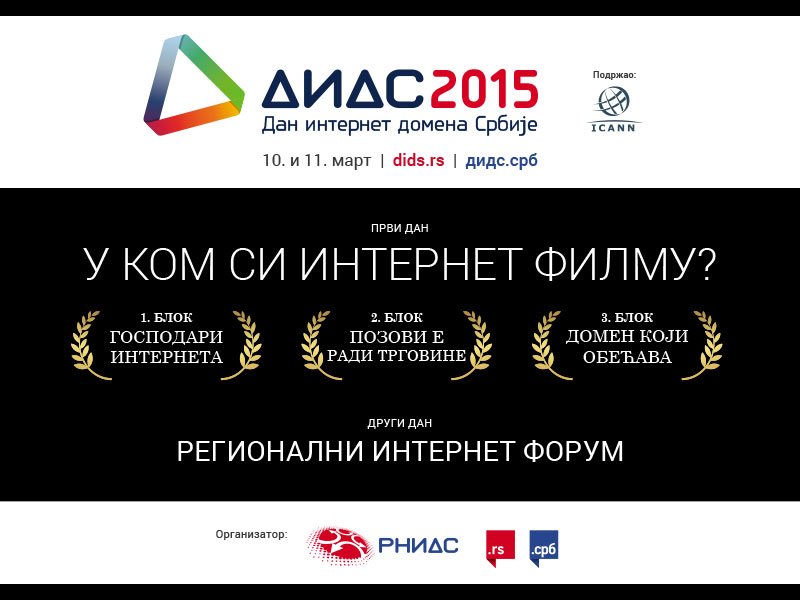 More than 300 visitors took part in this year’s Serbian Internet Domains Day (DIDS 2015), held at the Metropol hotel in Belgrade and organised by the Serbian National Internet Domain Registry Foundation (RNIDS). DIDS 2015 was the sixth annual conference on the development of the Internet globally and in the Serbian .rs and .срб domain spaces, held this year under the slogan “Which Internet Film are you in?”.

The all-day programme, divided as always into three blocks, saw IT professionals from all sectors of the economy, Internet providers and accredited registrars come together with other local Internet users to hear the experiences of some thirty conference speakers from home and abroad.

In the first block titled “Masters of the Internet” the topic of discussion was the forthcoming changes to the global governance of the Internet. Without proper and impartial translation of domains into IP addresses and their fair allocation to billions of connected devices, the Internet would become fragmented. As of September, oversight of these tasks is due to be transferred from the US government to “all of us”, that is to the global Internet community, and a multistakeholder model of Internet governance established.

“According to this model, ICANN (the Internet Corporation for Assigned Names and Numbers) would have full authority to administer the global network, whilst countries, corporations and other stakeholders, acting within various bodies, would be able to make proposals and take active part in shaping policy and practice relating to cyberspace, but not take autonomous decisions. The proposed model is rather complex and formalised, and could lead to a lack of inclusiveness for stakeholders,” said Vladimir Radunović, director of cyber-security and e-diplomacy at the DiploFoundation and moderator of the “Masters of the Internet” panel debate.

The second block, titled “Call ‘E’ for Commerce” was dedicated to e-commerce in all its aspects: legal and financial, promotional, logistical and software-related. Participants in the panel debate were local experts in the field who presented specific solutions from the practical experience of their own online projects. Block moderator was Miloš Petrović, web entrepreneur and blogger.

“The Serbian public does buy online, but e-commerce has still not fully taken root in the minds of retailers. Things are changing, though, and more and more companies are having sites built with e-commerce platforms in place. At the same time, there is no longer a distinction between foreign sites and local sites. The Internet is global, and that is how consumers already perceive it,” explained Petrović.

The third block, titled “A Promising Domain” was, as ever, reserved for important sites on the national .rs and .срб Internet domains, covering everyday topics which illustrate the potential for the creation of quality content as well as for global business. This block was moderated by Radomir Lale Marković, co-founder and manager of content marketing agency TAG Media.

RNIDS is the only organisation to have arisen from the Internet community in Serbia that has in recent years supported the development of the Internet in Serbia. In addition to managing the national top-level Internet domains, its supplementary objective is the development of the Internet in Serbia, and especially of local content. “DIDS is the most visible and probably most significant way in which RNIDS gathers together the community from which it arose and assists it in achieving its full potential. This year DIDS took on a regional significance with the organisation of the Regional Internet Forum on the second day of the event, which also served as a preparatory meeting for this year’s EuroDIG – the European Dialogue on Internet Governance – to be held in Sofia,” said Danko Jevtović, RNIDS CEO.

Additionally, the sixth annual conference on the development of the Internet globally and in the Serbian .rs and .срб domain spaces received the support of ICANN, the lead organisation for the administration of the Internet and its global structure.

More information on the DIDS 2015 conference, as well as links to video material and a photo gallery from the event, can be found at dids.rs.

Although we the users – and our needs and interests – doubtless have an effect on what new Internet services will be developed, it is becoming increasingly clear that our influence on important cyberspace policies and practices is limited, not least on those relating to privacy and data protection, intellectual property models, surveillance of electronic communications and content control.

How great is our influence, though, on the actual functioning of the Internet – on the management of the critical resources without which it would not be the massive, unified, global, open network it is today?
Every time we open a web page, start a phone app or send a message, the “net” checks the domain and IP address that we need to contact in order to establish communication. Without proper, impartial translation of domains into IP addresses, and without the fair allocation of IP addresses to the billions of devices connected worldwide – computers, mobile devices and, increasingly, “smart things” – the Internet would become fragmented.

Currently, these functions – known as the IANA functions – are administered by ICANN, a global, not-for-profit organisation in the US under the direct supervision of the US government. Not for long though – as of September this year, supervision of these vital functions is due to be passed on to someone else: not to another state, the United Nations or any similar entity, but into the hands of “all of us” – the users, engineers, corporations and states.

Is such a model necessary or would it be better for states to have global responsibility and oversight? Is such a model fair, and does it ensure equal opportunities for all users worldwide? Is it even feasible, or could it all fall apart? What would the model look like? What would all of our roles be and how would we play them? How realistic is it that a solution will be devised by September, and what happens if it is not? And what is our place in all this, here in Serbia?

Video footage of the 1st block:

The legal and financial, promotional, logistical and software-related aspects of e-commerce

In this block we will look at e-commerce in all its major aspects, from the technical to the legal and logistical to the marketing aspects. Participants in the panel debate will be local experts in the area who will present specific solutions from the practical experience of their own online projects.

Video footage of the 2nd block:

Successful sites and online projects on the national .RS and .СРБ Internet domains

The third block of DIDS is traditionally reserved for prominent websites on the national .RS and .СРБ domains. Representatives of home-grown websites and online projects will talk about their experiences and growth.

Video footage of the 3rd block

Once Upon a Time

Radomir Marković is the co-founder and manager of the TAG Media agency, which grew out of IT TV Produkcije, an independent production company founded in 2003. With a Masters in television and video production, with more than 20 years’ experience, Lale Marković has long been the presenter and editor of the popular TV programme eTV, which presents the latest news from the IT market. As of last year he has also authored the programme eJutro, the most watched IT programme in the country.

Alongside his TV activities he also edits the liveTV portal, the first Internet television broadcaster in Serbia. He is a member of the Serbian Association of Managers and the American Chamber of Commerce in Serbia.

Vladimir Radunović is a lecturer and Director of educational programmes in the areas of Internet governance, cyber-security and e-diplomacy at the Diplo Foundation, an international non-governmental institution.

He was a member of the Advisory Board of the Global Forum on Cyber Expertise and was a member of the UN Multistakeholder Advisory Group for the Internet Governance Forum. His professional focus is on Internet and broadband access policies, cyber-security, net neutrality and openness, e-diplomacy and e-participation, education and capacity-building for institutions and Internet decision-makers.

He graduated from the Faculty of Electrical Engineering in Belgrade and has a Master’s degree in contemporary diplomacy from the University of Malta, and is currently doing his PhD on cyber-security.

Leonid Todorov earned his M.A. in Linguistics from Moscow State Pedagogical and did postgraduate studies in international relations, management and business leadership, and economics in Denmark, Taiwan and US.

Since the onset of the Russian reforms, he served for more than a decade as Chief of Staff to late PM Yegor Gaidar. His background also includes private sector and academic activities.

In 2008, he joined the Сoordination Сenter for .RU top level domain as Head of Government and International Relations and contributed to the successful launch of the Cyrillic-script IDN ccTLD .РФ and the launch of new gTLDs . ДЕТИ (kids) and .TATAR.

In February 2015, he was appointed as General Manager of the Asia Pacific Top Level Domain Association (APTLD).

As a member of the RIGF Organizing Committee, Leonid has also been engaged in creation and promotion of the Russian Internet Governance Forum, the biggest event of its kind across Eastern and Central Europe and the post-Soviet Space. He also sits on the Multistakeholder Steering Group of the Asia Pacific Regional Internet Governance Forum (APrIGF). In 2013-2014, he sat on the ISOC Advisory Business Council and currently is a member of the CCNSO ICANN’s Strategic and Operations Plan Council and observer at the CCNSO Council.

Leonid is a faculty member of the European Summer School on Internet Governance.

Leonid’s focus is on ccTLDs’ operation, Internet governance, new gTLDs, public policy and international cooperation in the ICT area, and cybersecurity. He has authored and coauthored a number of publications on these issues, and presented at various national and international events.

If you continue browsing without choosing one of the options, you agree with the usage of cookies.